Run of the Mill

Famous musician, 26 year old millionaire, and known playboy Tyler Clark finds himself launched into his repressed past after a chance encounter with an old friend during the after party of one of his concerts.

Under threat of blackmail, Tyler is forced to painfully reveal the truth behind the summer of 2002 a summer that started with drugs, sex, and good music, and ended in tragedy, betrayal, and suicide. 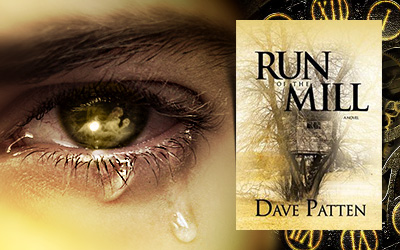 Hidden gems are really hard to find. Lucky me, this one has found me, on its own!

It probably starts with the tone of the ‘voice’ that tells the story – it has to be open, to sound sincere, maybe switching a bit between cynical and fun, but it has to show emotion, it has to feel as real as someone whispering in your ear. And here, the narrator’s (Tyler’s) voice is all that and maybe some more.

Then come the characters – they must have depth, they need to grow, to change through the story. I don’t mind it when the authors turn the characters’ skin inside-out and outside-in, even though they better have a good reason for it, as I don’t break my heart for nothing. And in case you are wondering where am I going with this, rest assured that Dave Patten took his sweet time developing the characters and the dynamics between them throughout this book.

Except for one “unfortunate” (to put it mildly) situation involving Tyler (that felt so terribly out-of-character especially for him and that made me wonder ‘how in the world would he do that’?), all characters evolved naturally and their actions made sense, in one way or another. They did good things, they did bad things, they blew up my whole reading universe, but they stayed on their path; there was a specific trajectory that defined them and made everything feel plausible, real.

All of them were very young at the beginning and I grew attached to them step by step. They were full of life, they were fun to be around, they were shy but there was also this confidence coming up from deep down. I witnessed their friendship blossom and I was scared knowing that something will go terribly wrong at some point. I feared for them, I wanted to keep them all safe, to take them home.

And so now we get to the plot.
Because the story has to have a bit of mystery to keep me on the edge of my seat – as this one did. I loved switching perspectives, back and forth between present and past, making connections, trying to predict what was going to happen next, holding my breath when things went in the very wrong direction. And yes, this felt like watching a train wreck – I knew where we were headed and still I couldn’t look away.

So, the thing is … my reviews are not always the most reliable, because they are all based on feelings.
Depending on the range of emotions emanating from a book I might tell you just how much I liked it.
And this one I loved. It was filled with raw emotions – the highs were moon-high, the lows were sea deep (though not quite overwhelming, more in like an “I can’t believe what just happened” kind of way) and I loved everything in between.

As I already said, the author took his time developing his characters and, more importantly, the dynamics, such that you get to connect with them emotionally. The story is mostly about Tyler Clark and his friends Jules Levin & Kyle Hall, but there are also other side characters that make an appearance every now and then – and some of those are to be remembered as well.

Being with these characters since infancy you get to witness their growth – you get to feel their childhood innocence, you get to laugh at their mischievousness. This is a self discovery story, so it is full of teenage dreams and disappointments, there is falling in and out of love, of friendship; there are hopes, there are fears, there are monsters under the bed and skeletons in the closet and there are so many laugh-out-loud moments to ease it all.. There is a bit of everything to be honest, the characters get through various transformations and they do feel real.

Happiness is a choice. I wasn’t a fan of depression; it’s miserable, there’s no sugar coating it.

Tyler is this average guy full of qualities and flaws. He makes tons of mistakes, but he usually means well. He used to be a bit shy and it’s fun to watch him grow out of that ‘habit’. Nothing is quite black and white with him, it’s all about mid-tones, about compromises, he is a very complex character. When you start reading you find him in a hard place (aside for being rich, famous, surrounded by girls, still incredibly lonely) – the past is weighting on his shoulders and he needs to let it go, to forgive himself and the people that have wronged him. But forgiveness sometimes is not an option, being sorry sometimes will not solve a thing (will it?), and that’s why he is running in circles, living in this numbness he can’t shake off no matter what.

Jules.. well, she’s a crazy, fun girl. She is so full of life and energy, pretty much like a sunshine in Tyler’s life. She is less present in the story but her fingerprints are all over Tyler. She shapes him when she is present and takes away a part of him when she is not. They fit perfectly and I remember many cute and funny moments that involved them both.

Kyle is another complex character. Sometimes he is the one pushing Tyler from behind, and some other times he shuts himself even from his best friend; he cares about his sister but acts the complete opposite. It was really hard to keep track of his moods; I understood what he’s been through, but I didn’t get him as a person.

Kyle. He always had an upbeat attitude and was ready to take over the world, even while the real one around him crumbled.

…And then, there is Rachel, the blackmailing reporter, the reason for this introspection. I read her like an open book from the beginning (though not the specifics, not the how’s, or the why’s) so I couldn’t wait to see where was she headed with this all, even though her methods seemed to be quite harsh and shocking. To be honest, I wished for a few chapters from the future (post ending), I still have many questions, but that’s another story altogether.

I had to make a few small compromises:

– I had to pretend that Rachel’s actions were not over the top (yes, she was pushing just the right buttons there, putting salt and pressure on some bleeding wounds, but could things have been less dramatic and still get similar results? I guess she didn’t have much time and had to take really drastic measures to obtain her goal, but it felt a bit like too much *shaking head*).
– Then I had to pretend that ‘law’ was a pretty relative term (to be honest it is quite flexible in real life too, but my conscience was making these disapproving noises in my head, as the characters have done some major and terrible things that never seemed to affect them completely, or for which they’ve never been accounted).
– Finally, let’s just assume that paparazzi can be dismissed this easily – by refusing to confess something, and they won’t ever secretly peak into your life revealing all of your darkest fears. *pinky swear*

And that’s it.
We are left with a great story to follow.

‘Run of the mill’ was my first legitimate success as a musician. The feeling of being loved and praised for what you’ve dreamt up and willed into fruition is both awesome and addicting.

I am not really sure what worked best.. Maybe the male POV that I usually enjoy enormously (breaking a bit the routine, ‘know what I mean?), maybe the fact that the characters where born in the 80′s (few years after me, but still) and I could connect better with them (though I didn’t have such a crazy teenage life – not so much heartbreak, maybe not so much fun either), or was it the ‘open’ writing style that felt natural and fresh, just how I like it?

You might read this book and focus (like the synopsis, as a matter of fact) on the dramatic side of the story, but what I saw was (also) pure youth energy and fun. Because half of it was a wonderful introspection in the life of this young man. Yes, it is true that he has lost midway a part of himself and now he needs to follow back the same path in order to hopefully find it, but there was so much more to him in the ‘before’. And the truth is that this book was actually really fun at times – I love sarcasm and Tyler’s comments made me smile (or laugh) so many times.

But yeah, there are some very serious topics considered in this book, even though not all of them have been addressed in the ending (or maybe that’s just how I felt). There is this tiny line between right and wrong, just and unfair.. The author stood right on top of it watching it all unfold, but his characters were switching sides in what seemed like a pretty crazy dance.
I loved the mix between the ‘light’ and the ‘heavy’ tones, it made the story feel balanced. I did feel like it ended too soon (it’s always the case with good books, they actually have to end at some point, shame on them!), but the pacing was great, same with the character development.

I just played. I let the music pour out from my soul, thorough my fingers, out into the night air.

The sole reason for the missing half star in the rating (I bet you’ve noticed it already) is that I think that sometimes being sorry is simply not enough. I am sure that the main character understood how easily and effortlessly a coin can flip, but the weight on his conscience means almost nothing to me if he doesn’t prove it in some way, if he doesn’t make up for… it. And I will leave it at that, as I don’t want to spoil anything in this review.

… Because this story is full of them and I want to share them with you all:

– people make mistakes, terrible mistakes, that might or might not fully define them;
– you can’t really judge someone until you have your feet inside their dirty shoes;
– the past might follow you, no matter what you do, no matter how fast or far away you run from it;
– nothing kills your soul quite like regrets;
– people heal, wounds heal, but there might not be a cure for the weight on your shoulders, that’s yours to carry.

This is it, folks, I really hope that you will enjoy this book as much as I did (I even plan on getting a paper copy to keep on my shelf, that’s how much I liked it)!

I’ll be here waiting for at least one more book from Dave Patten before I declare him a favourite author of mine. *hint, hint*

Book source: A copy has been kindly provided for review purposes.

This time I’ll choose a song from the author himself, as it fits perfectly the mood of this book – not the lyrics though, those are from a completely different story. Anyways “On This Road, On My Own” is a beautiful song full of sadness and regret, just like the book, and it also peaked my curiosity making me want to read this book. So here it is…